16 Days in WA not out with the Scorchers 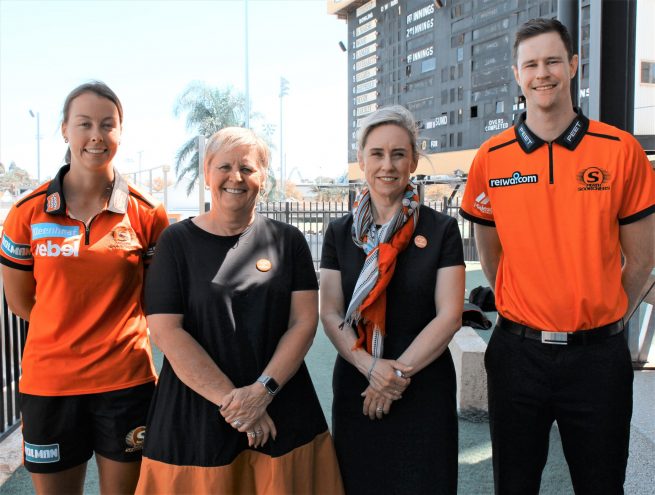 The campaign, now in its third year, aims to raise awareness about family and domestic violence and inform Western Australians about what they can do or say to help save lives.

Minister McGurk commended the WACA’s role as an industry leader in championing opportunities for women in sport, and thanked Ms Matthews for her support of this year’s 16 Days in WA campaign.

Earlier this year, Ms Matthews was named a finalist for Western Australian of the Year in recognition of her outstanding career achievements as a celebrated cricketer and sports administrator, and a personal champion of gender equality and inclusivity in sport.

Ms Matthews remains Australia’s most capped female Test cricketer and is one of only two women in the world to hold the position of CEO of a first-class cricket association. During her seven-year tenure as WACA CEO, female cricket participation numbers have increased by over 550 per cent across Western Australia.

The Perth Scorchers and their famous orange playing kit have become much-loved emblems of WA summers in recent years. Their home fixtures played at ‘The Furnace’ attract huge crowds at Optus Stadium as the venue transforms into a sea of orange, which is also the official campaign colour of 16 Days in WA.

A big part of the Scorchers’ success over recent Big Bash League (BBL) seasons has been the consistent performances of star paceman Jason Behrendorff.

The 29-year-old has been a key player for the Scorchers since 2012 and earlier this year was selected as a member of the Australian team for the Cricket World Cup that was hosted in England.

Piepa Cleary has been a mainstay of the Scorchers’ setup in the Women’s Big Bash League (WBBL) since the inaugural season in 2015-16.

A leg injury sustained in early November brought a premature end to the 23 year-old’s 2019 WBBL season, but the Scorchers women have rallied in her absence and will take part in the finals series this weekend at the Alan Border Field in Brisbane.

Further information on 16 Days in WA to Stop Violence Against Women can be found here.

“16 Days in WA gives all Western Australians the opportunity to speak out for change,” said Prevention of Family and Domestic Violence Minister Simone McGurk.

“This is a real issue. On average, our police services are responding to 180 family and domestic violence-related tasks each day across WA. It needs to stop.

“Christina Matthews is an extraordinary leader and I applaud the work of her and the WACA board in driving greater opportunities for women in sport.

“There are few greater sights in WA sport than witnessing The Furnace ablaze in orange as the Scorchers play in front of their passionate home fans.

“I hope the Scorchers’ support for 16 Days in WA will prompt their fans and sports-mad Western Australians to start a conversation with their friends and family about what they can do to help stop violence against women.

“I would like to also acknowledge Piepa Cleary and Jason Behrendorff for their willingness to support this year’s 16 Days in WA campaign.

“As a role model for so many young aspiring cricketers, their decision to speak out will help influence and change the conversation that allows violence against women to go unchallenged.”

WACA CEO Christina Matthews said, “the WACA stands with Minister McGurk and the WA State Government in supporting the 16 Days in WA campaign to stop violence against women.

“I was honoured to deliver the guest speech at this year’s 16 Days in WA campaign launch at Optus Stadium. The statistics on gender-based violence in this State continue to be shocking.

“We are all united in our support for change. Together we can make a difference.”