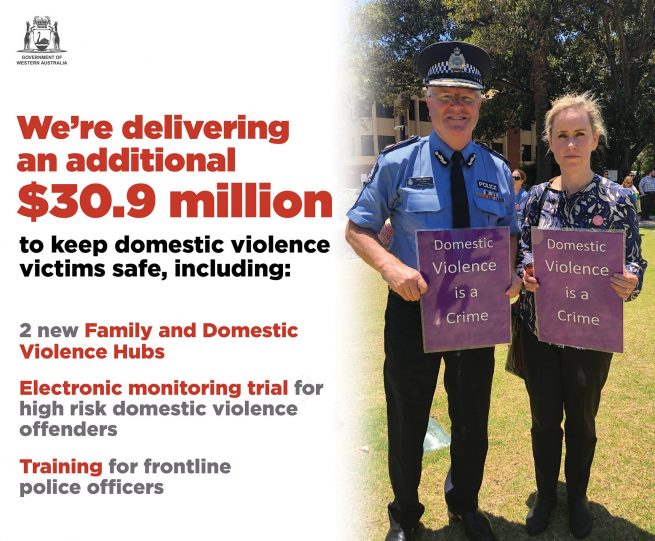 Prevention of Family and Domestic Violence Minister Simone McGurk today announced the McGowan Government will commit an additional $30.9 million in the 2019-20 State Budget to address family and domestic violence.

The McGowan Government’s investment in a suite of initiatives includes:

Two new Family and Domestic Violence One Stop Hubs will be established to provide integrated, wraparound services to make it easier for victims to get help sooner, fulfilling an election commitment.

The specialist hubs to be located in Mirrabooka and Kalgoorlie will bring together health, legal, housing and financial counselling services, with specialist domestic violence workers to support victims from diverse backgrounds. An integrated intake team will co-ordinate access to services to support improved safety and decision-making based on a holistic picture of the victim’s situation.

To be developed in consultation with key stakeholders, these hubs are expected to be established in 2020.

Western Australia has the second highest rate of reported physical and sexual violence perpetrated against women and this violence is most often perpetrated by partners, ex partners or a family member. The State’s Family and Domestic Violence Response Teams triaged around 50,000 incidents last year.

The McGowan Government’s Stopping Family and Domestic Violence Policy is focused on reducing the impact of domestic violence through a comprehensive package of initiatives that address victim safety, perpetrator accountability, a more responsive justice system and prevention and early intervention.

Delivering on two election commitments, victim safety will be strengthened with a $15.5 million investment towards an electronic monitoring trial for high-risk domestic violence offenders who have breached violence restraining orders; and $2.1 million of funding for the Western Australia Police Force to develop a family violence Code of Practice and training to frontline police officers.

A dedicated Family and Domestic Violence Monitoring Unit will be established in partnership with the Department of Justice and WA Police Force. This will provide 24-hour electronic monitoring of family violence offenders who have breached violence restraining orders in the community, including an additional 10 police officers for the police contribution to the unit.

The Code of Practice will support the WA Police Force to investigate family and domestic violence incidents and include specific policies for the investigation of offence reports involving indigenous victims.

Continued funding has also been allocated to the RSPCA for the Pets in Crisis program and the Kimberley Family Violence Service.

“Reducing the State’s unacceptable high rates of domestic violence is a key priority evidenced by the significant investment by the State – this Government has committed more than $53 million in new funding since 2017,” said Prevention of Family and Domestic Violence Minister Simone McGurk.

“Western Australia has high rates of domestic violence and the McGowan Government is determined to work with the community sector to address this problem.

“Family and domestic violence has a profound and long-term impact on the health and wellbeing of women and their children, families and throughout our community.

“This new funding will contribute to our priority of a safer community by establishing new services, delivering new training, and trialling the monitoring of perpetrators.

“The two new hubs are about meeting a critical need for victims to get the help they need sooner and without the repeated trauma of re-telling their stories. They are also about supporting evidence-based ways of working so that Western Australian community based services are delivering effective and collaborative support to those most in need.”

Police Minister Michelle Roberts said, “Family violence is a crime. Assault is assault, whether it is perpetrated by a stranger or a family member.

“By having a dedicated monitoring unit, I hope victims will be empowered and have the confidence to come forward and report family violence matters to police so that offenders can be brought to account.”