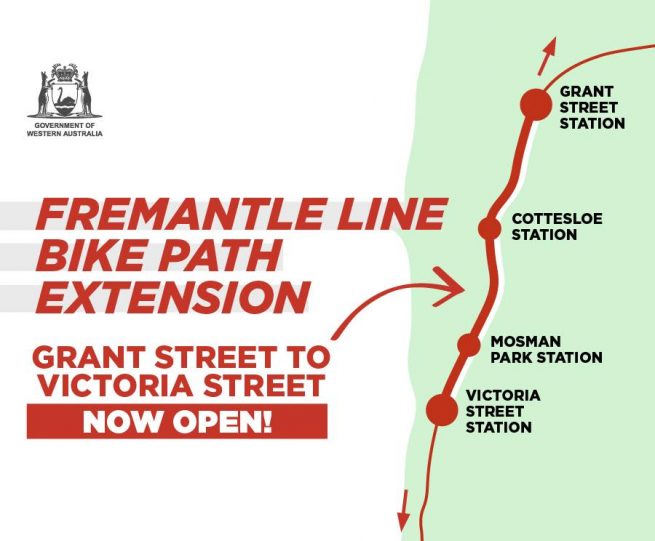 Funding to build the missing link on the Fremantle Line PSP was brought forward in the McGowan Government’s 2018-19 Budget, allowing construction of the project to start in January 2019.

The completion of the 2.8km extension, that used to stop at Grant Street in Cottesloe, means cyclists no longer need to share a busy stretch of Curtin Avenue with cars and trucks.

This means there is now a high quality, off-road path all the way from Midland in the eastern suburbs to Perth CBD and now to Victoria Street Station in Mosman Park.

A new PSP underpass at the Eric Street Bridge in Cottesloe, also helps pedestrians and cyclists avoid conflict with traffic at Curtin Avenue.

Minor works and landscaping will continue in the area over the coming weeks.

Meanwhile, the next stage of the Fremantle Line PSP upgrade project is currently under design and will involve building a further 2km of path between Victoria Street and North Fremantle Station. The design will be completed this financial year and service relocations will commence soon.

As part of the Fremantle Traffic Bridge replacement project, the third stage will see the Fremantle Line PSP extended from North Fremantle Station, across Tydeman Road and the Swan River.

Planning has also commenced on the final stage between the Swan River and Fremantle town centre.

“Now that this new section of the Fremantle Line PSP project is complete, I encourage the community to get their bike or scooter or lace up their running shoes and give it a go,” said Transport Minister Rita Saffioti.

“We recognised the connectivity and safety benefits of extending the Fremantle Railway PSP, and we made sure the funds were available earlier to get it moving.

“I know the communities around the new path have been waiting many years for this so I hope to see lots of commuters, visitors and local families along the path, particularly as the weather warms up.

“This is all part of the McGowan Government’s $146 million cycling investment and goal to complete the PSP network within 15km of the CBD. Works are also underway on the Armadale Line, Mitchell Freeway and Kwinana Freeway.

“We are committed to providing safe and continuous riding and walking facilities to the community and closing the missing links on the PSP network, and the completion of this section will allow more people to enjoy the benefits of active transport.”

It will deliver a smoother, safer ride and walk to the beach, the western suburbs and the city.”