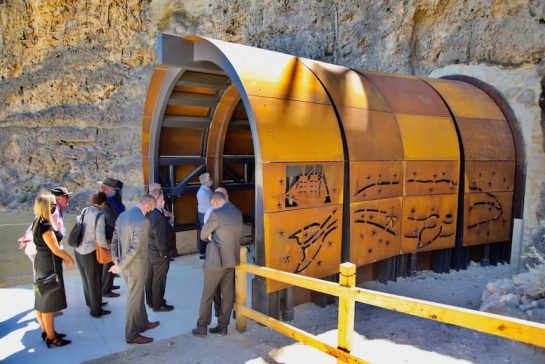 Conservation works to restore and reinforce the Arthur Head cliffs and the Whalers Tunnel in Fremantle are now complete with the installation of an artwork depicting a Mamong (whale) on the new rockfall canopy.

The McGowan Government provided a grant of $500,000 to the City of Fremantle – as part of the WA Recovery Plan following the COVID-19 pandemic – to complete urgent conservation works to stabilise the cliff faces at Arthur Head.

The heritage site is home to the iconic Round House, Western Australia’s oldest existing building, which was constructed by prisoners in 1831.

In 1837, the Fremantle Whaling Company sourced prisoners from the Round House to dig a tunnel through Arthur Head so they could quickly move whale products from their jetty on Bathers Beach to High Street in the town centre.

The prisoners undertook the difficult and dangerous task of digging through the limestone foundation using only basic implements such as pickaxes, completing the tunnel in January 1838.

The Round House ceased to be used as a permanent prison in 1857, following the completion of the Fremantle Prison complex. The aim of the conservation works was to reduce the erosion of the limestone cliff faces and retaining walls at Arthur Head, while balancing their heritage values and improving visitor access and safety.

The new arch-shaped rockfall canopy, extending towards Bathers Beach, is made from weathered Corten, and features a laser-cut image of a Southern Right Whale (Mamong) with starfish and stars scattered in and around its body, along with a small European boat above its tail.

Local artist Jo Darbyshire worked closely with local Noongar Elder Dr Noel Nannup and Anne Brake from the Fremantle History Society to create an artwork that reflected both the cultural significance of the Mamong to the Whadjuk Noongar people and the importance of the whaling industry to the colony’s economy in 1840s.

The starfish and stars within and around the Mamong represent the Kulungas (little spirit children) that lived in the Mamong and were released when it died, which Dr Nannup details in his story ‘Singing the Whales’.

The new rockfall canopy has been designed to respond to the coastal elements, with the Corten steel being weathered off-site for eight weeks to develop a natural surface protection for corrosive environments. Internally, the canopy is fitted with hydraulic impact buffers for additional support.

These conservation works have really enhanced the heritage values of Arthur Head. The artwork in particular brings a new element to the place that helps tell the story of both the Noongar connection and the whaling element. I am really pleased to see these works completed and ready for visitors to enjoy once again