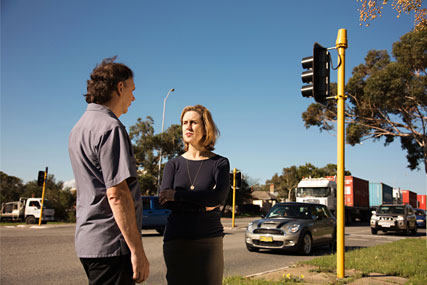 The announcement that the Perth freight Link will be built from 2016 is a call to arms for anyone who cares about sensible infrastructure planning.

The State and Federal Liberal Governments announced on Wednesday that they would jointly spend $1.6 billion to build the road from Perth Airport to Fremantle Port, which would include the controversial Roe 8 extension.

State Labor MP Simone McGurk said while the project was being touted as lessening road congestion, in reality it would simply move the problem to other communities.

“This is not good government.  The design is a farce, a massive road that will bottle-neck at Stirling Bridge and Tydeman Road,” she said.

“It is hugely expensive, underutilises our rail infrastructure and destroys precious wetlands.”

“Once introduced for trucks, there will be significant pressure by industry to extend the tolls to passenger vehicles.

“What is needed is proper utilisation of our freight rail infrastructure, and planning for a second port. This would equip us for decades to come,” she said.

Ms McGurk urged residents of Fremantle to get behind the campaign to stop the Perth Freight Link project.

“This nightmare road is not inevitable. I urge the community to join the campaign to stop this waste of precious infrastructure dollars,” she said.

**Please ensure you return original petitions only, as scans, photocopies or faxes cannot be tabled in Parliament.