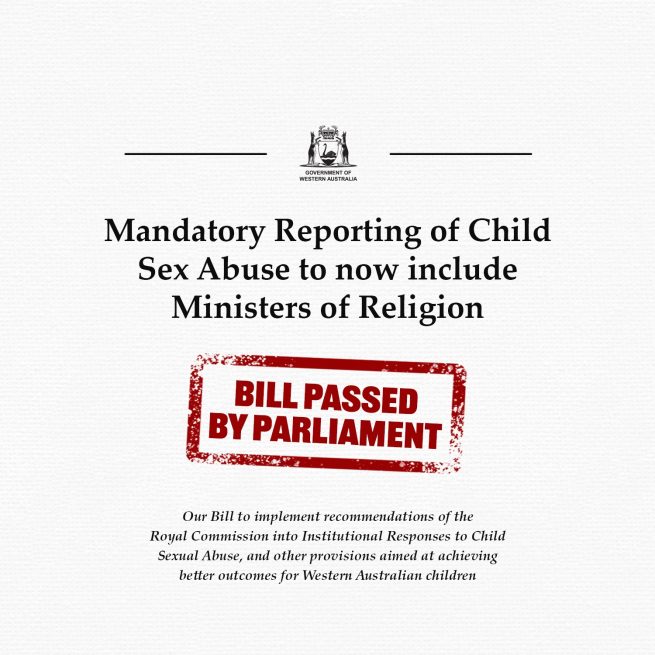 The Children and Community Services Amendment Bill 2021 has today passed State Parliament, delivering on the McGowan Government’s commitment to require ministers of religion to report child sexual abuse, including when information is gained during confession.

Safety of children is at the heart of the mandatory reporting reforms, which will better protect children by increasing the number of people who are legally required to report child sexual abuse.

The staggered implementation of the eight new mandatory reporter groups is expected to increase the number of people legally required to report child sexual abuse by an estimated 55,000 reporters.

Significantly, there will be no excuse for failing to make a mandatory report because a minister’s belief was based on information disclosed to the minister during a religious confession, or because making the report would otherwise be contrary to the tenets of the minister’s faith or religion.

The State Government is also committed to working more closely with Aboriginal people, organisations and communities to build stronger connection to family, culture and Country for Aboriginal children in care because the evidence shows this is fundamental to achieving better outcomes for children in out-of-home care.

Key amendments in the legislation supporting this include:

These changes will strengthen the Act to better protect children from harm as a result of abuse. Further information about the Children and Community Services Amendment Bill 2021 can be viewed on the Department of Communities website.

“The experiences endured and courage shown by those who bravely stepped forward during the Royal Commission into Institutional Responses to Child Sexual Abuse will not be ignored by the McGowan Government.

“The extension of mandatory reporting laws to ministers of religion and a number of other professions sends a clear message that child safety must always be paramount.

“In 2021, the McGowan Government has overseen the first reduction in the number of children in care since 1997, and these legislative amendments build on the government’s ongoing work to protect children and young people in WA.

“We are absolutely committed to working more closely with Aboriginal stakeholders to better inform decision making and ensure that Aboriginal people are at the centre of decisions that impact Aboriginal children, families and communities.

“The amendments passed today strengthen the Act to better protect Western Australian children and young people from abuse and associated harm, and include a number of practical steps to achieve this.” said Minister for Child Protection Simone McGurk.