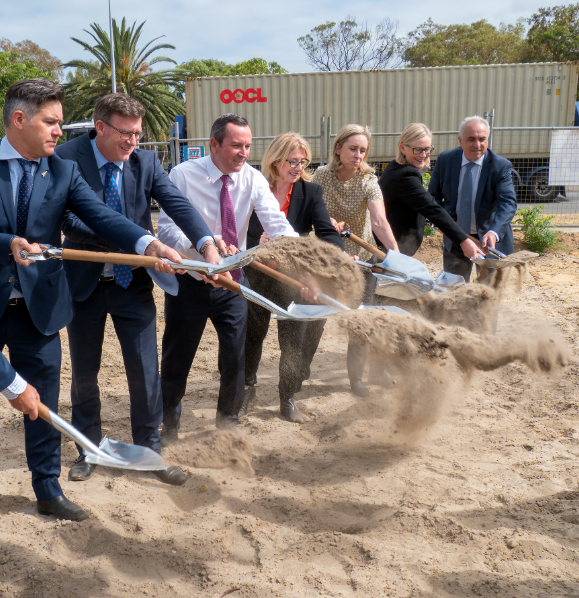 Construction has begun on the $118 million High Street and Stirling Highway intersection upgrade in Fremantle with the first sod turned today.

The joint Australian and WA government project will bust congestion and dramatically improve safety along a 1.5km section of High Street between Carrington Street and Stirling Highway, with construction and design works being undertaken by outstanding WA builder Georgiou.

WA Premier Mark McGowan said the upgrade was only one example of a suite of projects to be delivered this year.

“2020 is shaping up to be a huge year for public infrastructure construction across Western Australia,” Mr McGowan said.

“The High Street upgrade will deliver a more efficient route for locals and visitors travelling to and from Fremantle.

“We welcome the input of the City of Fremantle and the local community, who have helped shape the concept design and ensured that the project will move forward with strong support.”

Federal Minister for Population, Cities and Urban Infrastructure Alan Tudge said the upgrade would be a boost for the local economy with hundreds of new jobs created during construction.

“We also know that this intersection has become notorious for truck rollovers and the upgrade will mean a safer journey for locals and truck drivers,” Mr Tudge said.

The upgrade is part of the Morrison Government’s strategy to bust congestion in Western Australia which includes $13.6 billion committed since coming to office in 2013.

“Thanks to positive community consultation, we have also expanded the project scope to include two new pedestrian underpasses and improved parking and safety at the Fremantle Netball Centre.

“We will continue to alleviate pressure on roads by boosting freight on rail from 15 per cent to over 20 per cent, developing intermodals, and planning for the new Fremantle traffic and rail corridor solution to replace the current Fremantle Traffic Bridge.”

State Member for Fremantle Simone McGurk MLA said, “after years of inaction by the previous Liberal Government, followed by the Perth Freight Link debacle, we’re getting on with delivering the High Street Upgrade.

“It will create local jobs during construction, reduce congestion and improve road safety.

“We’ve worked hard to get the design right and deliver maximum community amenity including two pedestrian and cyclist underpasses, a local access road and improved parking for Gibson Park, and retention of over 70% of mature trees.”

About 700 jobs will be created during construction, which will include:

In the five years to 2018, there were 282 crashes along this section of High Street, including some truck rollovers at the High Street and Stirling Highway intersection.

The new roundabout has been designed to include bypass lanes that will separate local traffic from traffic going to and from Fremantle Port, or locations north of the river.

These intersection changes will improve efficiency and address safety concerns with the current intersection, including reducing the risk of truck rollovers.

Residents living in properties on the northern side of High Street will now have a dedicated single-lane service road, affording them safer access and separation from the main road.

Meanwhile, the two new underpasses will improve pedestrian and cyclist connectivity across the intersection. The project will also provide new formal parking bays adjacent to the Fremantle Netball Association to improve safety on game days.

Through carefully considered design features, the project will retain more than 70 per cent of the established trees in the area. These design features include a wide, tree-lined median on High Street, which will separate the eastbound and westbound traffic lanes, providing an attractive gateway into Fremantle.

Main Roads is also finalising an extensive landscaping and revegetation strategy for the project, which covers revegetation and landscaping of the road reserve to improve local amenity on High Street and Stirling Highway.

Additionally, following feedback from the local community, the strategy has been expanded to include a significant Tuart tree planting initiative across local sites.

The High Street upgrade is just one of the projects being delivered by the Australian and WA governments aimed at ‘boosting jobs and busting congestion’.

The Australian Government is providing $73.6 million and the WA Government $44.4 million for the upgrade.

In this area, the Australian and WA governments have also committed $230 million to build a replacement corridor solution to the Fremantle Traffic Bridge.