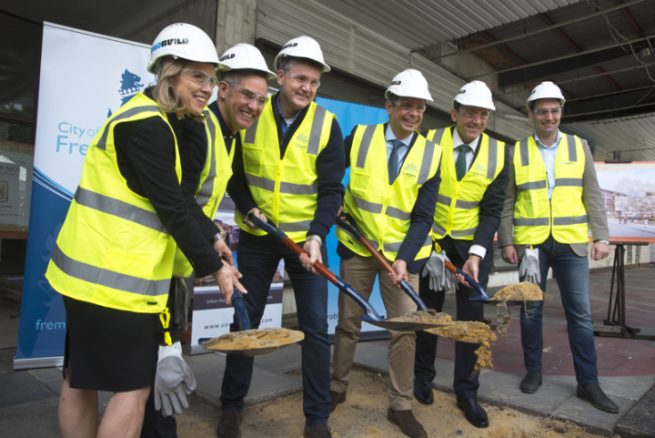 The commencement of construction on the Kings Square renewal project has officially begun with the turning of the first sod by Finance Minister Ben Wyatt, Housing Minister Peter Tinley and State Member for Fremantle Simone McGurk.

The builder, Probuild WA, has confirmed more than 1,100 full-time workers would be employed throughout the construction phase of the project.

Once complete, about 1,500 public servants will occupy 17,200 square metres of the 20,000 square metre office development component of the precinct.

Public servants from the departments of Communities and Transport are scheduled to relocate to the Kings Square office accommodation in 2020.

The relocation of the government agencies to Fremantle will deliver significant avoided office accommodation costs to government, improve community access to agency services, and deliver a valuable economic stimulus to the people of Fremantle.

“The commencement of construction on this site marks the beginning of a new era for the City of Fremantle,” said Finance Minister Ben Wyatt.

“With construction commencing this month, the boost to jobs and the Fremantle economy starts immediately and will continue when about 1,500 public servants move into their new offices in early 2020. ”

State Member for Fremantle Simone McGurk said, “Over 1,500 public servants working in the heart of Fremantle will breathe new life and much-needed economic activity into our city.

“I’m pleased to see this milestone project going ahead, and look forward to its completion.”