Council’s scheme amendment approval is next step in Beaconsfield redevelopment 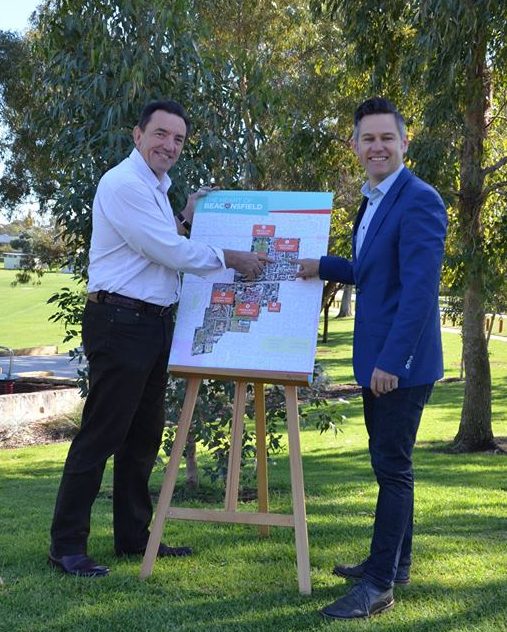 Housing Minister Peter Tinley has welcomed Fremantle City Council’s proposal to rezone the Davis Park area of Beaconsfield – a location colloquially known as the ‘Beacy Bronx’ due to its history of anti-social behaviour.

The Fremantle council recently agreed to seek amendment of its town planning scheme, a decision that, if formally endorsed by the Western Australian Planning Commission (WAPC), will help pave the way for further urban renewal of Beaconsfield.

Mr Tinley was advised of the council’s decision when he gave Fremantle Mayor Brad Pettitt an on-site briefing about the State Government’s proposed redevelopment of the 10-hectare Davis Park site bounded by South Street and Lefroy Road.

During the briefing, the Minister told Mr Pettitt that the newly established Department of Communities, which incorporates the former Housing Authority, is committed to continuing the positive engagement undertaken to date.

The urban regeneration plan, which will support hundreds of jobs during its construction phase, entails a full redevelopment of the area into a vibrant community and includes building a currently estimated 700-1,000 high-quality dwellings.

“Since discussions began in mid-2015, the City of Fremantle has been broadly supportive of Communities’ urban regeneration plan,” said Housing Minister Peter Tinley.

“As Housing Minister, I am encouraged by its recent decision to seek WAPC approval to rezone the Davis Park area for development.

“I applaud the council, led by Mayor Brad Pettitt, for reaching this milestone with a high level of community support.”

State Member for Fremantle Simone McGurk said,  “When I was first elected as the local member, nearly 100 people living in the Davis Park area signed a petition saying this development should happen.  It’s good to see the proposal moving forward.

“I believe it will result in much better outcomes for families living in Davis Park now and into the future.

“Facilitating this visionary project has great potential to generate significant employment prospects as well as creating a new and thriving addition to the Fremantle community.”