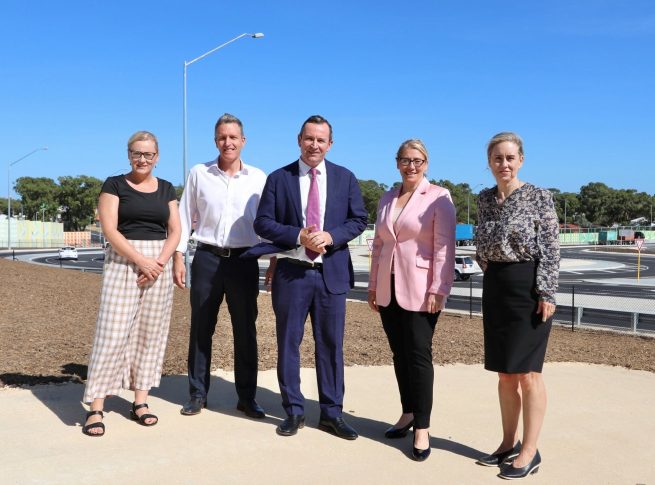 Journeys into Fremantle are now easier with the completion of the $76 million High Street upgrade project between Carrington Street and Stirling Highway.

The project was jointly funded by the Australian and Western Australian governments.

More than 37,000 vehicles use the road every day and it is anticipated journey times will be smoother and less congested, by eliminating delays at the High Street and Stirling Highway intersection.

Without the project in place, traffic modelling indicates that by 2031, journey times between Carrington Street and Stirling Highway would have taken up to 14 minutes longer.

Improving safety on the road was also a key consideration. In the five years immediately prior to the works, there were 399 crashes on this stretch of road, with 72 of these at the intersection of High Street and Stirling Highway.

The project was developed and delivered with local stakeholders and the community.

This has been reflected in the design of amenity walls, new netball parking, incorporation of Aboriginal and European heritage themes in the project artwork and the environmentally sustainable drainage solution at Horrie Long Reserve.

Main Roads also worked closely with the community to undertake a localised planting program, with an area of Booyeembara Park revegetated as tuart woodland. Almost 5,000 plants were planted as part of this initiative, including over 400 tuart trees.

The project also supported the purchase and planting of 4,000 new tuart trees, through a partnership with A Trillion Trees, with volunteers planting the trees at Whiteman Park in 2020.

This project marks the completion of the WA Government’s 2017 priority projects commitments.