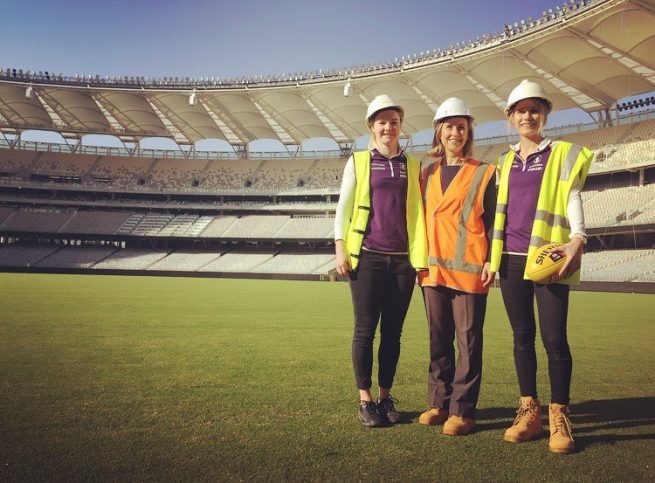 The Fremantle Dockers Women’s side is on track to make history when it plays against an AFL Women’s rival at Perth Stadium on February 10, 2018 – with the match expected to be the biggest standalone women’s sport event ever held in Australia.

Crowds are expected to be in excess of 30,000, breaking the attendance record for an AFLW match and easily eclipsing the 10,000 who watched Fremantle’s AFLW debut at Fremantle Oval.

The McGowan Government will provide free public transport to and from the match, with tickets only $2 and all proceeds going to charity.

Ahead of the match, fans will be able to watch the Fremantle Dockers men’s team train for the first time on the Perth Stadium playing surface followed by a signing and photo session.

Tickets to the match will become available following the release of the 2018 AFLW fixtures, with demand expected to be high.

Premier Mark McGowan recently announced that the official opening of Perth Stadium would be a free Community Open Day on Sunday January 21, 2018.

Perth Stadium will host two Ed Sheeran concerts and the Perth NRL double header in March 2018, Chelsea Football Club versus Perth Glory in mid-2018, State of Origin II and a Bledisloe Cup match in 2019 with more world-class events to be announced soon.

Construction of the 60,000-seat Perth Stadium is more than 94 per cent complete.

“The AFL Women’s match is expected to attract more than 30,000 fans, which would break the record for the biggest attendance at an AFLW match ever. This is a great event for Perth Stadium and women’s sport in general,” said Sport and Recreation Minister Mick Murray.

Women’s Interests Minister Simone McGurk said, “The AFLW Fremantle match has the potential to be the biggest ever standalone women’s sport event in Australian history – and the first of many more at Perth Stadium.

“Having this major AFLW event so early on in Perth Stadium’s life sends a great message to young women, girls and the wider community about gender equity – and I hope it will inspire many to follow their sporting dreams.”