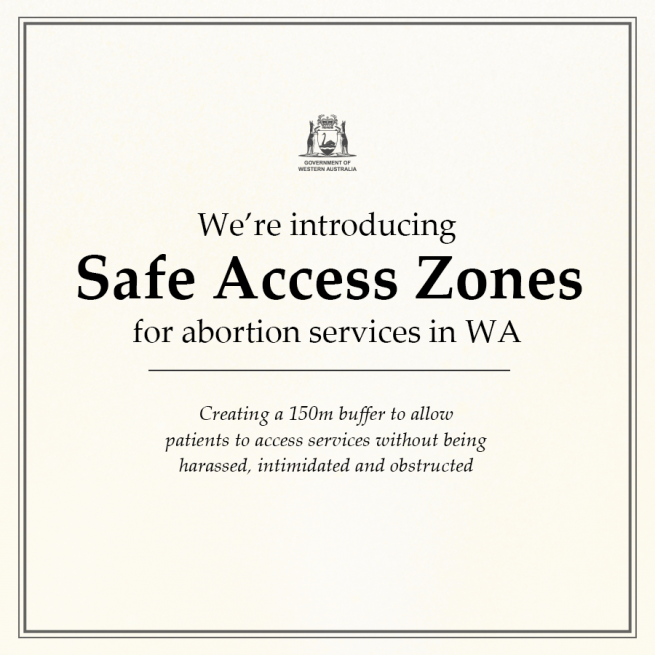 The McGowan Government will legislate to establish safe access zones around premises that provide abortion services in Western Australia.

The legislation is now being drafted with the purpose to protect and respect the safety, dignity, wellbeing and privacy of individuals seeking access to these legal medical services.

Significant community consultation on the issue was undertaken by the Department of Health between April and May 2019.

A report entitled Safe Access Zones – a proposal for reform in Western Australia released today presents the consultation findings and the recommendations of the Department of Health to the Minister for Health.

The consultation received an extraordinary level of community and industry engagement including more than 4,000 submissions from the general public and from more than 40 public and private organisations.

Seventy per cent of respondents supported the introduction of safe access zones around abortion services in WA.

It is proposed the zones will operate 24 hours-a-day and seven days-a-week.

It is not the purpose of the proposed legislation to review or debate the arguments for or against abortion in WA.

The legislation is expected to be introduced into Parliament later this year and will set out behaviours prohibited in a safe access zone, such as harassment, intimidation and obstruction, as well as penalties for non-compliance.

More information about the Report and the proposed legislation can be found here.

“Demonstrations outside abortion services act as a barrier to accessing legal health services, cause distress and anxiety to patients and staff, and are unable to be adequately managed by existing laws,” said Health Minister Roger Cook.

“The behaviour of demonstrators affects vulnerable patients and those accompanying patients to the clinics, as well as medical, nursing, allied health and administrative staff.

“Consultation has shown there is strong community support for the introduction of safe access zones around clinics and the McGowan Government will now move to introduce this legislation into State Parliament.”

Women’s Interests Minister Simone McGurk said, “Western Australia and South Australia are the only remaining states without safe access zones. It is time to bring WA into line with the rest of the country.

“Western Australian women have a right to access legal medical services without fear of intimidation or harassment.

“It is important to move demonstrators away from the immediate vicinity of premises that provide abortion services so that patients can access legal health services in a safe and confidential way.’

“Safe access zones are vital to help to ensure that women, who have a legal right to access these procedures, can maintain their privacy and safety.”