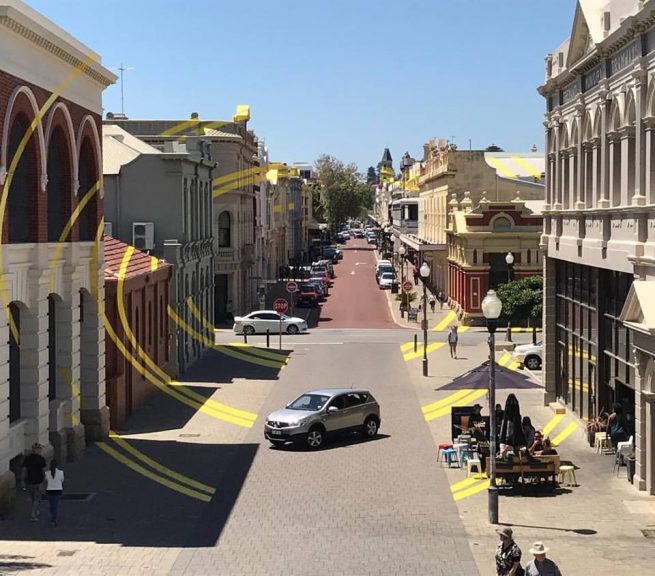 High Tide 17 – part of the inaugural Fremantle Biennale – is set to transform the port city’s West End precinct into a massive, outside art gallery.

The two-week event will feature some 30 site-specific artworks and performances at landmark buildings and locations across the port city.

Buildings and streets that will be transformed by the artists include the historic Round House; High, Cliff and Mouat streets; the Port Authority Building; Bathers Bay; the University of Notre Dame; the WA Maritime Museum and J Shed.

Hide Tide 17 will showcase the work of local and international artists such as Switzerland’s Felice Varini, whose massive Arc d’Éllipses installation will form the event’s centrepiece, eventually stretching some 800 metres along High Street and taking in 25 heritage-listed buildings.

The event is an initiative of the City of Fremantle as part of Fremantle Festival 2017, with funding from the Department of Local Government, Sport and Creative Industries; the Australia Council for the Arts; the University of Notre Dame and Quest Fremantle.

“High Tide 17 is about celebrating Fremantle’s landscape and heritage and its unique relationship between the river, the port and its many character buildings and streets,” said Culture and the Arts Minister David Templeman.

“Events such as High Tide 17 are part of the McGowan Government’s plan to support the creative industries sector, generate more employment in the arts and culture sector, and create more vibrant communities across Western Australia.”

“It’s events like High Tide that have contributed to Fremantle being named WA’s “most enjoyable precinct to visit” in recently published Tourism WA research.”

For more information on the High Tide event, click here.