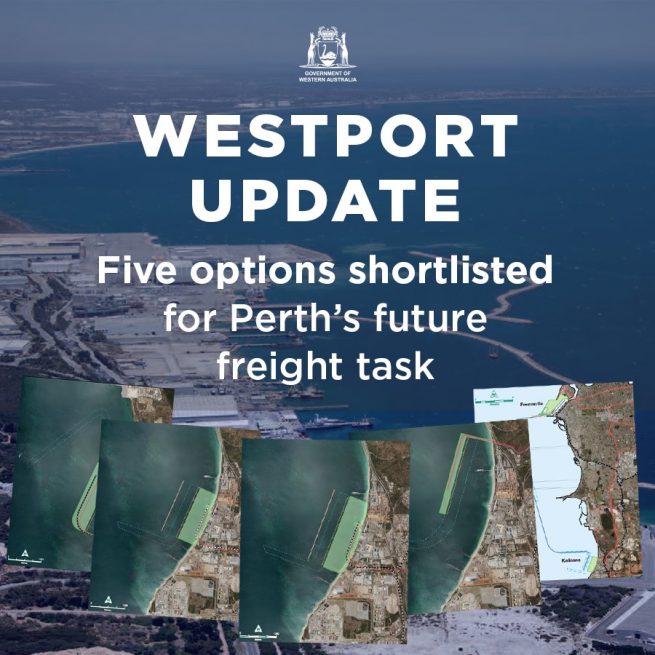 The independent Westport Taskforce has released its shortlist of five port and supply chain options for managing Perth’s growing long-term freight requirements, all of which feature a new port being established in the Kwinana Outer Harbour.

Westport’s evidence-based assessments ranked 25 different options featuring the ports at Fremantle, Bunbury and Kwinana against each other. The shortlist features the options that were awarded the highest scores across a range of important criteria, including capital costs and social and environmental impacts.

Three shortlisted options feature container operations – all of which are currently managed at Fremantle – being moved to a new port in Kwinana. Two further options propose sharing the container-handling task between Fremantle and Kwinana, or transitioning over a longer period of time.

Several Fremantle-only options were assessed in Westport’s process but rated poorly due to significant economic and social impediments. The analysis reinforced that a standalone Fremantle Inner Harbour would not stack up in the medium to long-term, even with Roe 8 and 9.

Westport highlights that even when factoring in a range of major road corridor upgrades, worth billions of dollars, the Fremantle Inner Harbour’s transport network will reach capacity by the mid-2030s – meaning planning and design of an Outer Harbour must start now.

Building a new port may take up to ten years to deliver, making the work of Westport crucial to determining the best long-term solution.

Westport is now focused on the next stages of its process, which will determine the top-performing option for the State’s long-term requirements. The detailed timings, location, scale and costs of the new port will also be confirmed.

“An efficient port with modern transport linkages is essential to the economic life of our State,” said Ports Minister Alannah MacTiernan.

“Westport’s work supports this Government’s commitment to plan for a new port at the Outer Harbour for the long-term development of our State.

“The plan to build a second major port at Kwinana has existed since the Stephenson-Hepburn Plan back in the 1950s. This is not new thinking; the Outer Harbour port has been supported by both sides of Government for decades. Westport’s work confirms that this remains the best option.

“Westport’s process is based on research, consultation and data. The shortlist was developed based on evidence and input from stakeholders and the community. It includes options that would see an ongoing role for Fremantle.

“While Bunbury did not make the shortlist, other opportunities to expand the port and local industry were identified by Westport. These will now be progressed by Southern Ports, the Department of Transport and local stakeholders.”

Transport Minister Rita Saffioti said, “Investing in a new Outer Harbour or upgrading Fremantle Inner Harbour is one of the biggest investment decisions a State Government can make, so we need to ensure all options have been explored.

“The work by Westport so far suggests that continually expanding the Fremantle Inner Harbour, along with the surrounding transport network, doesn’t stack up financially due to the many constraints in the surrounding area.

“Importantly, Westport found that even with another six unfunded major road upgrades, the network to Fremantle Port won’t cope by the mid-2030s, so it’s imperative that we plan now and have the Outer Harbour operating before then.

“In the short term the McGowan Government continues to alleviate pressure on roads by moving freight on rail, developing intermodals, upgrading High Street and building the new Fremantle Traffic and Rail Bridge.

“This is a coordinated freight and transport plan that will serve Western Australia for generations to come, will help grow the economy and support new industry.

“The continued funnelling of freight trucks to Fremantle and the western suburbs through built up residential areas does not make sense. In particular, as there is already $1 billion allocated to the next improvements of Tonkin Highway, including the extension to Mundijong.”

“They’ve narrowed proposals down to the five strongest options taking account of environmental impact, cost and land use compatibility

“While our opponents continue to fight old battles about road plans from the fifties, the McGowan Labor Government is getting on with planning for our future.”