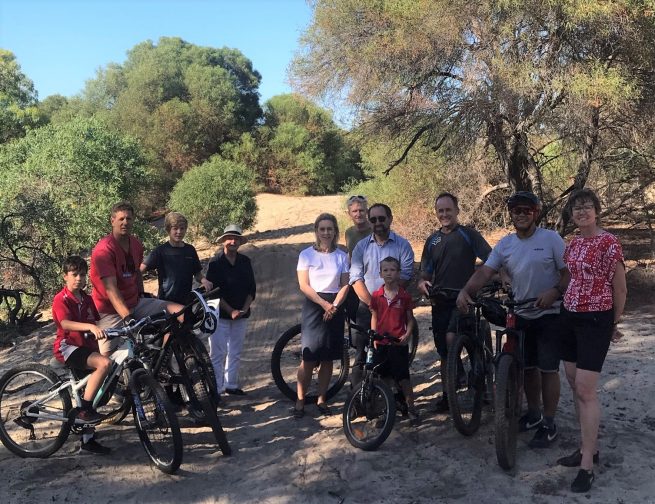 State Member for Fremantle Simone McGurk announced today that a re-elected McGowan Labor Government would contribute $300,000 towards the construction of Mountain Bike Trails at Booyeembara Park in White Gum Valley.

The City of Fremantle has identified the eastern boundary of Booyeembara Park as an appropriate location for the project.

Purpose built trails will improve safety and allow for better protection of flora at Booyeembara Park.

The project will incorporate trails of varying difficulty, creating a riding experience accessible to locals and visitors representing a broad range of abilities.

Fremantle is known for its strong cycling culture, and the trails will provide a valuable addition to one of Fremantle’s best public spaces, in a suburb which has recently seen an influx of young families.

The total cost for construction of the trails is estimated to be approximately $600,000.

The trails will be managed by the City of Fremantle and the Fremantle Mountain Bike Collective.

Further information about the project including the City of Fremantle’s concept plan can be found here.

“The new trails will improve safety, better protect the landscape, draw visitors to Freo and bolster the Boo Park experience for local families.”

Mark Taylor from Fremantle Mountain Bike Collective said, “As a community group with great local support, we’re thrilled to have the McGowan Government’s
help to get this project off the ground.

“Boo Park will offer mountain bikers of all abilities a chance to improve their skills in one of the world’s fastest growing sports a stone’s throw away from the centre of Fremantle.”

City of Fremantle East Ward Councillor Jenny Archibald said this project will deliver a fabulous facility for mountain bike riders of all ages.

“This is a very exciting news for White Gum Valley and all of Freo.”