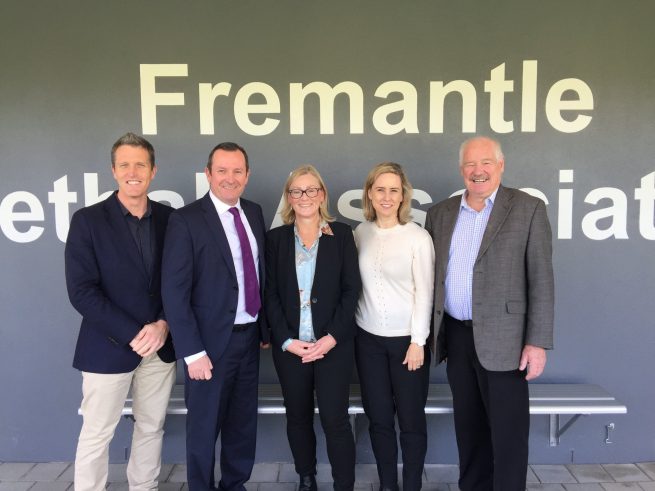 The award-winning Fremantle Netball Association, which is also celebrating its 60th anniversary, is a fixture for many Western Australian families during netball season, with the club’s courts accommodating thousands of local netballers each weekend.

The upgraded facilities include:

The project helped support local jobs in the southern suburbs, with the project managed by local builder Buildwell Group with help from local contractors.

The build provided work for a range of local supporting businesses, with Buildwell Group engaging as many local contractors as possible – creating work for electricians, manufacturers, plumbers and other tradespeople.

The McGowan Government funded the project with $1.8 million, through the Community Sporting and Recreation Facilities Fund, which provides support for local organisations to build infrastructure to grow their sport. The total cost of the project was $2.24 million, with the balance contributed by the club itself.

“We said we would build new facilities for Frank Gibson Park and I’m pleased we’ve done it and now able to celebrate its opening. I know local member Lisa O’Malley has been keeping a close eye on this project from day dot to ensure we delivered on this key election commitment for the community in the Bicton electorate,” said Premier Mark McGowan.

“During the construction phase, I also visited to see the progress so it’s terrific to be here today to see the finished product, which was built by local contractors and has contributed to local jobs and the local southern suburbs economy.”

Sport and Recreation Minister Mick Murray said, “Fremantle Netball Association is a fixture for thousands of Western Australian families, with many young girls forging a lifelong love for sport at the facility.

“Not only will these upgrades set the association up for the next generation and beyond, the project has been built locally, supporting jobs in a range of industries.

“I’d also like to commend the association for their significant contribution to this project. Fundraising is such an important part of grassroots sport and it is great to see the club come together to fund a proportion of this project itself.”

Fremantle MLA Simone McGurk said, “Nothing beats netball for grassroots engagement and involvement of girls and women in sport. I love seeing the thousands who congregate around the courts on Saturdays over winter.

“Fremantle Netball Association are so deserving of these clubroom upgrades to support players, volunteers and supporters at Frank Gibson Park.”

“With local contractors involved in construction and local families being able to enjoy the facilities, this entire project is a win for our local community.

“This state-of-the-art facility for netball players and supporters will ensure Frank Gibson Park remains the heart of the local netball community for years to come.”