New 16 Days in WA campaign: ‘Don’t be silent’ on violence 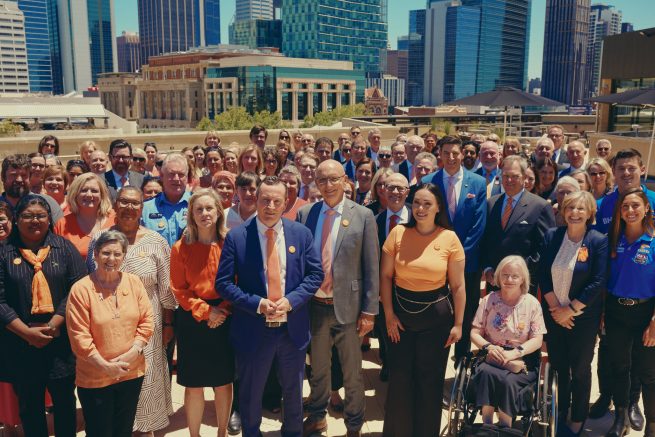 The McGowan Government has today launched its fifth annual 16 Days in WA to Stop Violence Against Women campaign, which urges Western Australians: ‘Don’t be silent when you see violence’.

The campaign encourages bystanders to speak up when they see violence or disrespect towards women, and aims to educate people on how they can safely challenge attitudes and behaviours that condone violence.

Alarmingly, one in five Australians believe domestic violence is a normal reaction to stress, and that a woman can make a man so angry he hits her without meaning to. One in three Australians believe that if a woman does not leave her abusive partner, she is responsible for the violence continuing. These attitudes must change.

The McGowan Government has today also announced the Kimberley region will be the location for its fourth one-stop family and domestic violence hub.

The hub model provides a range of specialist family and domestic violence and other community services in one location, prioritising ease of access for victims who are seeking help and support. By co-locating key support with other services, the hubs create a ‘soft’ entry point that also reduces the stigma often attached to seeking assistance.

Along with the new Armadale hub announced last month, the Kimberley hub will build on the success of existing facilities that opened in Mirrabooka and Kalgoorlie last year.

The Kimberley hub is part of a $60 million package of election commitments made by the McGowan Government. It will be designed to deliver a culturally appropriate service and reflect the needs of the regional community, which has a high rate of Aboriginal women experiencing family violence.

16 Days in WA runs from today (International Day for the Elimination of Violence Against Women) through to December 10 (Human Rights Day). The campaign takes its inspiration from the global 16 Days of Activism against Gender-Based Violence.

For a campaign kit, including a list of 16 ways to take action, visit: https://www.communities.wa.gov.au/16DaysinWA

“Violence against women is never acceptable.

“We must challenge alarming attitudes towards violence in our community.

“We all have a part to play in this challenge – I’m urging all Western Australians to not be silent when you see violence.

“By speaking up we can together save lives and help break the cycle of violence.

“My Government is committed to keeping women and children safe and delivering initiatives to ensure help is readily available for those at risk, including our new Kimberley one-stop family and domestic violence hub.

“It was an honour to be joined by June Oscar AO, a much-loved and respected Aboriginal community leader from the Kimberley who has dedicated her life’s work to improving outcomes for her people, to announce additional support for her region.

“I encourage all Western Australians to wear something orange, attend a 16 Days in WA event and take action in their communities to help bring an end to violence against women.” said Premier Mark McGowan.

“Now in its fifth year, 16 Days in WA is an important campaign promoting the rights and safety of women and their children.

“Violence against women must be stopped, and each year this message is getting louder as community support for change grows.

“This year, we are calling on bystanders – people who may not have personally experienced the threat of violence at home – to speak up and challenge attitudes and behaviour that condone violence against women.

“If you see or hear women being degraded, disrespected or treated in an unacceptable way, take a stand and speak out or safely take action.

“The expansion of the one-stop hub model to the Kimberley and development of a standalone Aboriginal Family Safety Strategy further demonstrate the McGowan Government’s commitment to driving down the State’s high rates of family and domestic violence.