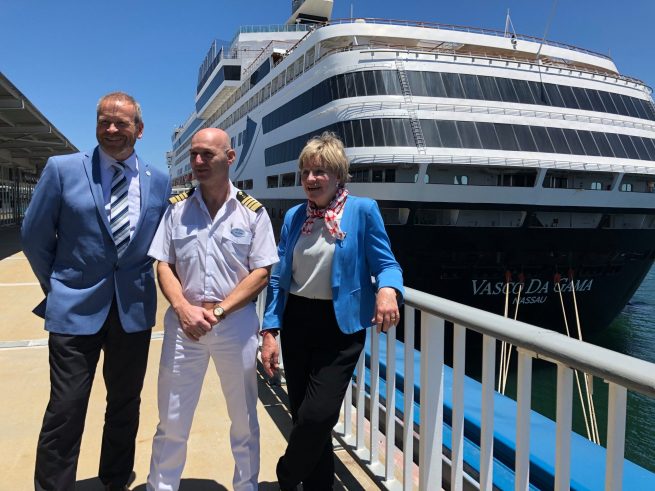 The newest addition to the Cruise and Maritime Voyages (CMV Australia) fleet, the premium Vasco da Gama will be home-ported in Fremantle for the first time this summer, until February 12.

Described as small to mid-sized, the 220 metre Vasco da Gama’s 1,220 guest capacity more than doubles that of CMV’s Astor, which had been based in Fremantle from 2013 to last year.

The Vasco da Gama brought 935 passengers from Busselton this morning, with a further 856 passengers embarking for its maiden Western Australian voyage to Broome and then Bali. An additional 110 passengers remained on-board.

Cruise shipping in 2018-19 contributed $229 million to the WA economy and supported about 848 jobs, and the McGowan Government has driven efforts to increase cruise tourism in WA.

The McGowan Government’s $15.3 million dredging at the Port of Broome, completed in September 2019, was a deciding factor in Vasco da Gama choosing to homeport at Fremantle for the 2020 cruise season.

The dredging at Broome enabled better access for cruise ships at all tides, eliminating some of the challenges cruise lines faced when deciding on destinations.

The McGowan Government also refurbished the Fremantle Passenger Terminal in a $3.25 million makeover, completed in early 2019.

CMV Australia has also committed Vasco da Gama to Fremantle for the 2020-21 season.

“The McGowan Government has taken real steps to market WA as a cruise destination, and that work is paying off with ships like the Vasco da Gama home-porting at Fremantle for the first time,” said  Ports Minister Alannah MacTiernan.

“Cruise and Maritime Voyages is running with a new WA itinerary that includes stopovers at WA ports, extending visitor nights in the State.

“This has a strong impact on our local and regional economy, supporting WA tourism businesses and jobs while giving visitors the opportunity to explore Perth and regional WA.”

State Member for Fremantle Simone McGurk said, “I’m thrilled to welcome the Vasco da Gama to Fremantle and look forward to its visits this summer and next.

“Our Government has brought the cruise tourism industry back to Fremantle and WA after years of neglect under the previous Liberal Government led to operators pulling anchor.

“More cruise ships in port at fremantle means more local jobs, a more vibrant town centre, and more opportunities to showcase all that our port city has to offer.”