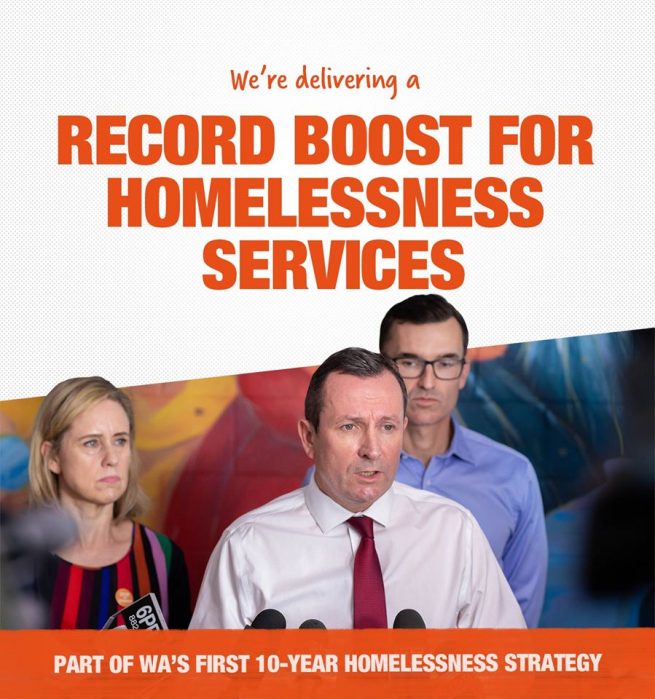 The McGowan Labor Government has announced a new $150 million Housing Investment Package for Western Australians striving for home ownership or a quality home to live in.

The significant funding package for more social and affordable housing provides additional homes for people on low incomes or at risk of homelessness, while supporting the WA economy and the important housing construction industry.

The Housing Investment Package will deliver:

Shared equity home ownership provides people who would not otherwise access home ownership, with lower deposit loans and no lender’s mortgage insurance, whereby they co-own a share of the property with the State Government, which lowers their loan amount.

The $150 million package comes on top of the $335.8 million already budgeted to be spent on building and refurbishing social and affordable homes over the next two years.

Over the past 12 months, the building and construction sector has received significant stimulus boosts through a string of measures by the McGowan Government designed to stimulate the sector and create jobs.

These include the temporary changes to the successful Keystart model, which has made a positive contribution to helping Western Australians into home ownership.

Keystart’s temporary changes to income limits for borrowers, which increased by $15,000 for singles and couples and by $20,000 for families, was to end on December 31 but will now be extended to June 30, 2020. The income limits will revert to previous levels on July 1, 2020.

The McGowan Government has also approved an additional increase to Keystart’s borrowing limit by $437.2 million to support more Western Australians in achieving home ownership. This follows a series of approved extensions to extend Keystart’s loan book and will boost its lending capacity to $5.3 billion.

Since the inception of Keystart in 1989, more than 107,000 home loans have been formally approved helping hundreds of thousands of Western Australians to get into the market and achieve home ownership.

The Housing Investment Package announced today comes on top of the $535 million invested by the McGowan Government recently to help stimulate the WA economy and create jobs for Western Australians.

“This package will go a long way to helping those in need, get into a home,” said Premier Mark McGowan.

“It’s a result of our responsible Budget management, and it’s Western Australians that will be reaping the benefits.

“The $150 million boost to our housing construction industry will help create 1,000 new jobs and ensure this vital industry in the WA economy continues to grow.

“It will boost the supply of short and long-term housing options for people experiencing difficulty getting into a home and supports people at risk of homelessness through the availability of more social and affordable housing.

“The Housing Investment Package and the extension to Keystart’s income eligibility changes are all about putting home ownership within the reach of more Western Australians, supporting some of our most vulnerable Western Australians and stimulating the economy.”

“The package will provide around 1,000 jobs in the property and home building industries and generate hundreds of millions of dollars in economic activity.

“This package, designed to improve the responsiveness of the social housing system, will generate significant cost savings to government and the community and produce benefits in financial outcomes and also in the improved quality of life for individuals.

“It complements recent changes to the State’s highly-successful Keystart scheme.

“Since these changes to Keystart’s eligibility criteria, it has received 2,580 applications – 1,292 of which were formally approved and 187 of which were done so under the new income limits.”

Community Services Minister Simone McGurk said that homelessness is something that people experience at a specific point in time, and does not define their lives or their long-term prospects.

“This additional housing supply targeting homeless and vulnerable people on the priority housing waitlist is something the sector has been calling for.

“We can’t solve homelessness without addressing housing supply, and this package will go a long way to supporting Western Australians most in need of assistance.”