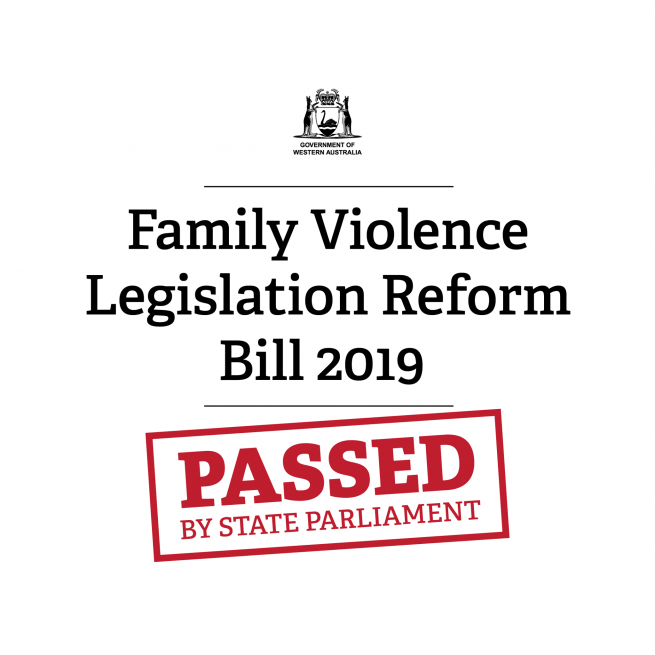 The most comprehensive family violence law reform package ever seen in Western Australia has passed through both houses of Parliament.

Significantly, it demonstrates a cross-Government commitment to tackling the scourge of family and domestic violence by amending nine separate pieces of legislation across six ministerial portfolios.

These new laws put WA at the forefront of the fight against family and domestic violence.

One of the key changes is a new specific criminal offence for suffocation and strangulation, which is an important risk factor in the context of family violence.

Research has found that a female victim of strangulation is seven times more likely to be the victim of homicide, compared to other family violence victims.

Persistent family violence will also become a criminal offence, in recognition of the reality of family violence for many victims, where the perpetrator commits persistent and ongoing acts of violence against them.

The McGowan Government committed to stopping the scourge of family and domestic violence by ensuring that laws protect the most vulnerable people in our community.

“This comprehensive Bill is the culmination of a significant collaborative effort across government, police, the legal system and other key agencies,” said Prevention of Family and Domestic Violence Minister Simone McGurk.

“These transformational changes respond to our increased understanding of how family and domestic violence impacts victims, who are predominantly women and children.

“We cannot ignore the growing awareness of the inherent danger of non-fatal strangulation and how it can be a precursor to escalating violence.

“The rates of family and domestic violence in the community are unacceptably high and the Government is determined to send a very clear message – violence is never OK.

“I truly believe that these changes will save lives.”

“Over the past three years, the McGowan Government has proved its commitment to stopping family violence and changing the story for victims with a series of legislative reforms.

“In announcing these reforms, I stood alongside the CEO of the Women’s Council for Domestic and Family Violence WA who said they were exactly the changes they had spent the last 40 years fighting for.

“I am pleased that we have been able to deliver these important reforms to support victims and ensure our justice system is responsive to family violence matters.”