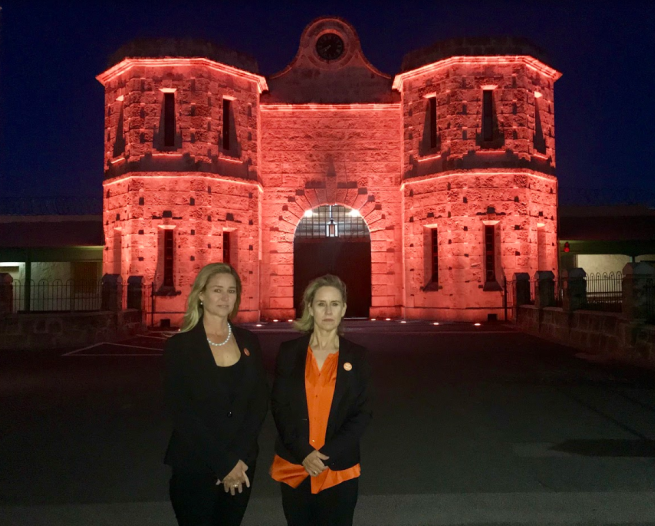 Fremantle Prison’s icon ic gatehouse has been set aglow for the State Government’s campaign, 16 Days in WA to Stop Violence Against Women.

As part of the campaign, 16 other landmarks across the State, including Fremantle’s Shipwrecks Museum, will be lit in orange – the international colour for the 16 Days campaign.

The campaign runs between 25 November (International Day for the Elimination of Violence Against Women) and 10 December (Human Rights Day), and aims to raise awareness and educate Western Australians on what they can do or say to make a positive difference.

The statistics about violence against women continue to be stark:

She stressed however that Government alone could not solve this complex issue, and that the campaign was about encouraging everyone to play their part – government, business, community services and individuals.

Fremantle Prison will be illuminated from 26 – 29 November and 3 – 10 December, and the WA Shipwrecks Museum from 25 November – 10 December.

Further information about the campaign, including a schedule of lit landmarks can be found here.

“Violence against anyone is unacceptable, however it is a shocking fact that most women who are murdered are killed by someone they know, and most women who experience violence do so at the hands of a current or former partner, said State Member for Fremantle Simone McGurk.

“I’m really pleased to have such an iconic Freo Landmark reminding the community that we all have a role to play in changing the conversation that allows violence against women to go unchallenged.

“It can be as simple as calling out aggressive or demeaning behaviour, learning where to get support for someone experiencing violence, or starting a conversation with your kids about respect.

“We are pleased to support the 16 Days in WA campaign to raise awareness of family and domestic violence by lighting the gatehouse orange.”