Protection of Beeliar wetlands a step closer to becoming law 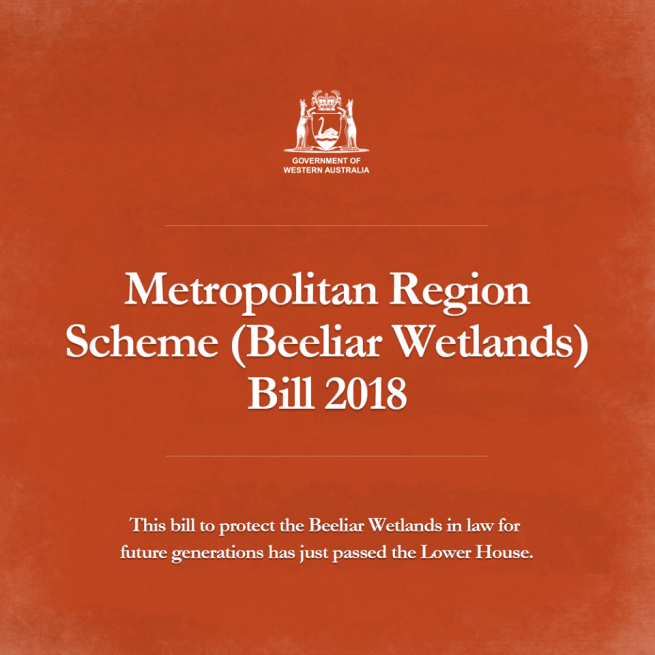 Legislation that will permanently protect the Beeliar wetlands last night passed through the Legislative Assembly.

The McGowan Government made an election commitment to protect the Beeliar wetlands following strong community calls for the area to be protected for future generations.

Western Australians gave the McGowan Government a clear mandate not to build Roe 8 and 9, to restore the Beeliar wetlands, and return the land for the community to enjoy.

Since then the State Government has reallocated Perth Freight Link funding to 17 alternative road projects across Perth, creating 6,000 jobs. It has also increased the amount of freight on rail from 15 per cent to 23 per cent.

Meanwhile, the Westport Taskforce shortlist for future port options all involve an outer harbour, reinforcing the fact that Roe 8 and 9 will not solve WA’s future freight challenges.

“The Bill will now move to the Legislative Council, where support is needed to make this law,” said Transport and Planning Minister Rita Saffioti.

“I ask the members of the Legislative Council to support this Government’s mandate and respect the local community’s wishes.

“This is the time to move on from old plans and start moving towards the best solution for our State – building an outer harbour and protecting the Beeliar wetlands.

“The work by Westport so far suggests that continually expanding the Fremantle Inner Harbour, along with the surrounding transport network, doesn’t stack up financially due to the many constraints in the surrounding area.

“We are continuing to implement our plan to put more freight on rail, creating more intermodal transport opportunities and upgrading High Street in Fremantle.”

State Member for Fremantle Simone McGurk said, “The Perth Freight Link never stacked up. It was exceptionally poor planning, and would’ve done irreparable damage to our environment and local communities.”

“The people of WA saw through the PFL and elected the McGowan Labor Government.

“The Liberals now need to respect that mandate and support this bill in the Upper House, so our State can put this sorry debacle behind us.”