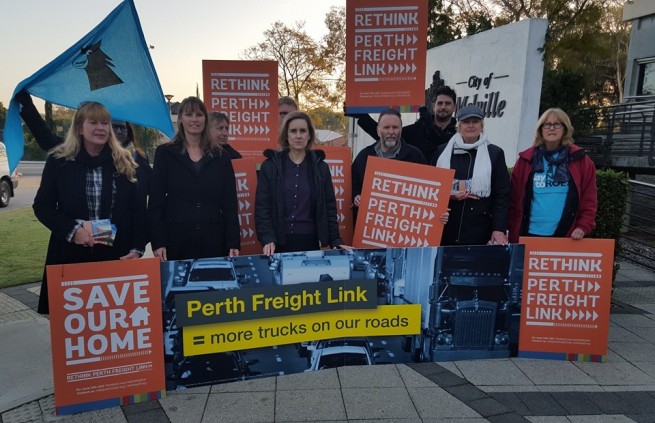 Residents affected by the Perth Freight Link have challenged Transport Minister Dean Nalder over the controversial project outside an exclusive breakfast function this morning.

The Minister was scheduled to speak about the project at a breakfast hosted by the Melville Chamber of Commerce after having previously refused to visit residents whose homes are in danger of being demolished.

State Labor MP for Fremantle, Simone McGurk, threw her support behind the residents.

“Minister Nalder has still not been down to front the residents affected by the Perth Freight Link in their communities, but he is willing to go to an on-side audience of the Melville Chamber of Commerce,” Ms McGurk said.

“People in Palmyra stand to lose their homes and nearby businesses close while people in Hamilton Hill and White Gum Valley, who would be impacted by the tunnel option, have had no formal contact over how an alternative route might impact on them.

“The uncertainty is unacceptable, and it’s become clear that this road to nowhere is a waste of taxpayers’ money that will damage the fabric of the local communities in its path,” Ms McGurk said.

Meanwhile the Barnett Government is attempting to block the release of information on the Perth Freight Link project in the Senate.

“The Barnett Government has shown a clear reluctance to allow the $1.6 billion Perth Freight Link project to come under any public scrutiny,” Ms McGurk said.

“The problem the Government has is that the more is known about the Perth Freight Link, the more flaws are exposed.

“The solution is to scrap the Perth Freight Link now and instead invest in moving freight onto rail and planning for a second container port at Kwinana,” Ms McGurk said.