Spike in domestic violence incidents during the festive season 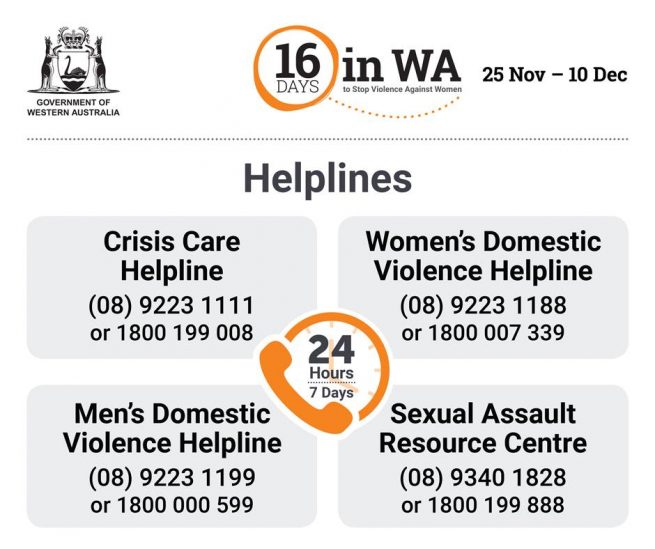 The State Government is urging people to seek assistance ahead of the upcoming Christmas and New Year period which is tragically characterised by a rise in family violence incidents.

The statistics have been released as part of the 16 Days in WA to Stop Violence Against Women campaign which aims to raise awareness about the issue.

The campaign is the McGowan Government’s contribution to the United Nations’ annual ’16 Days of Activism against Gender-Based Violence’ campaign. It marks the 16 days between the International Day for the Elimination of Violence Against Women (also White Ribbon Day) on November 25 and Human Rights Day on December 10.

“We hope by raising awareness of this issue through the 16 Days in WA campaign that we’ll see police reporting numbers go up. We need to redouble our efforts to provide good services to make sure people come forward.

“We need to change the conversation in our homes, communities and workplaces to end violence against women – 16 Days in WA to Stop Violence Against Women gives us the opportunity to do just that.

“Everyone has the right to live free from this violence.”

Police Minister Michelle Roberts said it’s a sad fact that police respond to a significant increase in the number of family and domestic violence incidents at this time of year.

“Christmas should be a time of love and not fear.

“I urge people to be sensible with their alcohol intake and be mindful of those things that make Christmas – peace, goodwill and giving joy to those we love.

“The McGowan Government is committed to reducing the scourge of domestic violence, keeping victims safe and holding violent perpetrators accountable.”