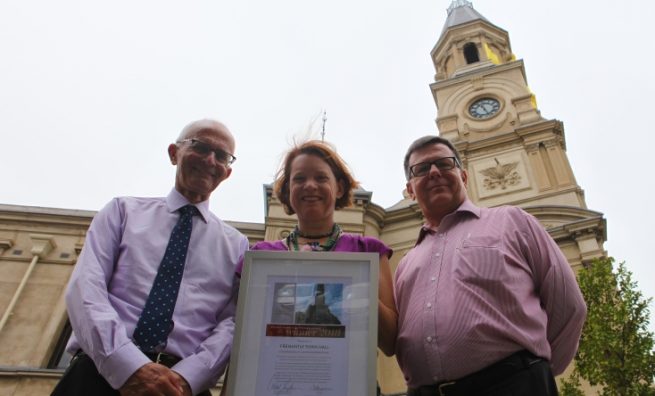 The transformation of Cue Public Buildings into a Community and Visitor Centre received the top project award for adaptive reuse at the Western Australian Heritage Awards held last Friday (March 23).

The awards, which are celebrating their 26th anniversary, recognise outstanding contributions to heritage conservation, adaptive reuse, promotion, tourism and interpretation.

The high standard of the volunteers, professionals, organisations and projects recognised at the Heritage Awards is testament to the vital and dynamic heritage scene in our State.

More information on the winners and commendation recipients can be found here.

“Friday night’s Western Australian Heritage Awards was a night of great anticipation, culminating in 19 heritage champions being recognised for the work they do to promote and conserve Western Australia’s cultural heritage,” said Heritage Minister Dave Templeman.

“Fremantle Town Hall was awarded the top prize for conservation, with the judges noting that its restoration had played an important role in rejuvenating Kings Square.

“The high standard of all the individuals and projects honoured illustrates why a Heritage Award is such a highly-sought after and valued accolade, and I congratulate all the winners on their outstanding achievements.”

State Member for Fremantle Simone McGurk said, “It’s fantastic to see Fremantle being recognised year after year at the State Heritage Awards, with this year’s gong following last year’s award for the stunning restoration and adaptive reuse of the Dalgety Woolstores.

“The City of Fremantle’s painstaking work to restore the Town Hall to its former glory really shows, and will allow the Town Hall to take pride of place in a newly redeveloped King’s Square.”