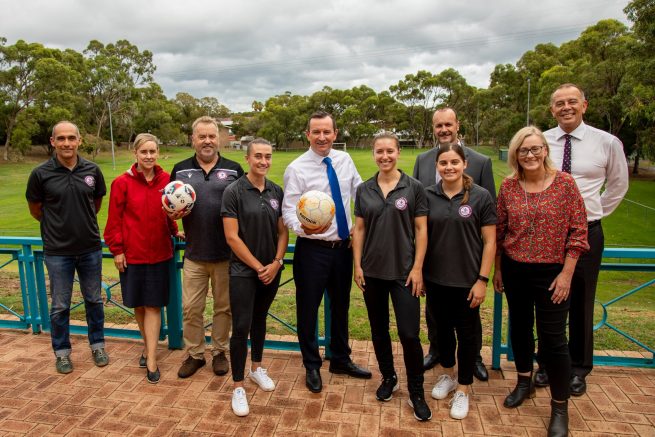 The club lacks suitable change rooms and toilets for women, with players currently forced to change in cars or at home after matches.

A lack of appropriate facilities is a barrier to increasing women’s participation, with many turned off by having no facilities or the need to share unsuitable men’s change rooms.

The Fremantle City Football Club’s Centre of Women and Girl’s Excellence at Wauhop Park has the highest participation rates for girls and women in WA.

With the 2023 FIFA Women’s World Cup coming to Perth, it is important the club’s facilities are fit for purpose as interest in the women’s game grows in the lead-up.

“Women’s sport is continuing to experience growth throughout Western Australia and it is so important we provide decent women’s change rooms and facilities to support this,” said Premier Mark McGowan.

“In 2018, my government introduced WA’s first women’s facilities fund to upgrade outdated men’s-only change rooms all around the State.

“These upgrades will provide Fremantle City Football Club with the facilities it needs to support the growth in the women’s game – especially in the lead up to Perth hosting matches at the 2023 Women’s World Cup.”

State Member for Fremantle Simone McGurk said, “the rates of participation at Fremantle City Football Club’s Centre of Women and Girl’s Excellence demonstrate just how important it is to provide decent, dedicated facilities for all players.”

“Women and girls should be able to come and play community sport without having to get changed in their cars or off in the bushes.

“These upgrades will ensure we continue to encourage women’s participation in football in and around Fremantle.”

“I’m proud to support levelling the playing field for local women and girls.”