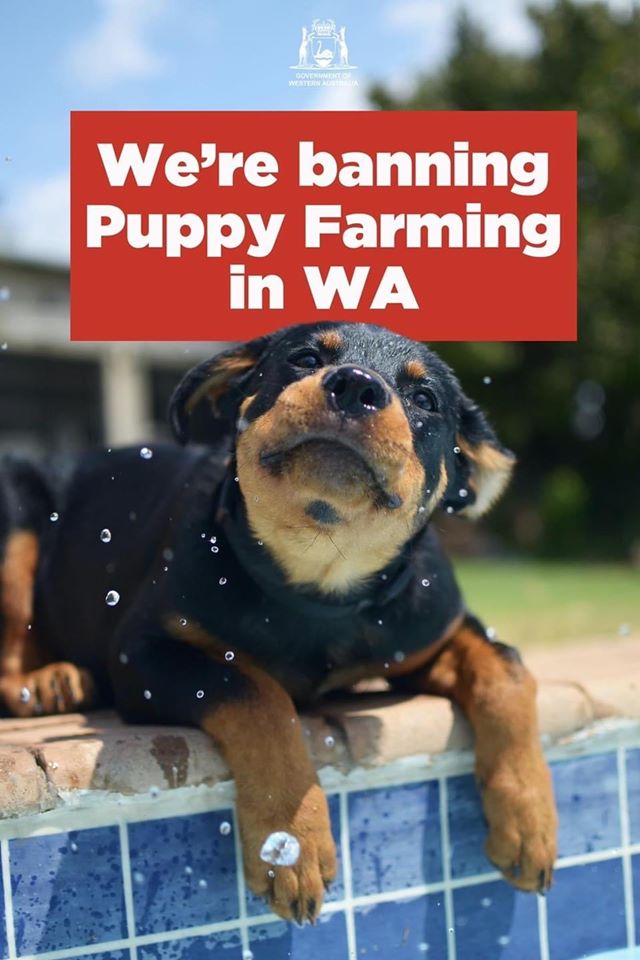 Despite overwhelming support by Western Australians during the consultation phase for reforms, the WA Opposition are currently not supporting the State Government’s Dog Amendment (Stop Puppy Farming) Bill to help end puppy farming in WA and ensure responsible dog ownership.

Puppy farming is the breeding of dogs in inadequate conditions. These conditions can be on a small scale, or on a large scale.

Dogs in puppy farms, both the puppies that are bred and the dogs used to breed, can end up with long-term health and behavioural issues.

Community consultation undertaken in 2018 was overwhelmingly positive, with approximately 5,000 submissions received which informed the draft Bill.

The proposed changes to the Dog Act 1976 include mandatory dog de-sexing; dog breeder registration; a centralised registration system to identify every dog and puppy; and the transition of pet shops into adoption centres.

Mandatory dog de-sexing and dog breeder registration aim to increase transparency and traceability in identifying where dogs have come from.

A centralised registration system to help authorities to access information that can identify irresponsible breeders.

Transitioning pet shops into adoption centres and providing them with targeted assistance to remodel their operation, the Government aims to create an additional outlet for the adoption of abandoned dogs.

It is proposed that these initiatives would work with new mandatory standards for dog breeding, housing, husbandry, transport and sale developed under the Animal Welfare Act.

The State Government is still committed to Stop Puppy Farming in WA and the rejection of new legislation by the WA Opposition puts the welfare, safety and health of dogs in WA at jeopardy.

More information on new provisions to the Act and the Stop Puppy Farming project can be found here.

“This legislation has overwhelming community support and this is another example of Liza Harvey and the Opposition not listening to Western Australians,” said Local Government Minister David Templeman.

“In WA, approximately one third of households have a pet dog – they are important to many families – and the Opposition not supporting this legislation is putting the health and welfare of dogs in Western Australia at risk.

“Dogs offer us so much in life and they are valuable members of our community. Looking after their wellbeing is the least we can do.

“Dogs are important to many Western Australian families, we made a clear commitment at the election and we intend to deliver on that.”

State Member for Fremantle, Simone McGurk applauded the bill, stating that the Freo community was overwhelmingly behind the bill.

“The Liberals should have their tails between their legs. West Australians in general and Freo people, in particular, are committed to animal welfare and responsible pet ownership.

“I call on the Liberals to stop playing games and get behind this bill.”