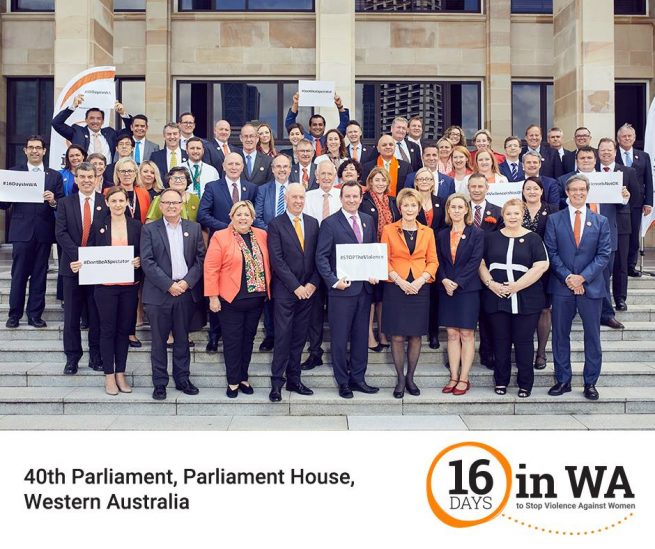 Members of the Parliament of Western Australia have united, calling for a stop to violence against women, acknowledging that it has wide-ranging effects on victims and their families, on communities, and on society as a whole.

The bipartisan group of 54 MPs and Her Excellency the Honourable Kerry Sanderson AC, Governor of Western Australia gathered on the steps of Parliament House today, proudly displaying orange ‘Stop the Violence’ badges in support of the 16 Days in WA to Stop Violence Against Women campaign.

With 50,000 family and domestic violence incidents reported in WA in 2016-17, this is not a problem confined to any one location. This is a State-wide issue that requires a whole of community response.

In Western Australia, the McGowan Government is working hard to respond to family and domestic violence in the community through victim safety; perpetrator accountability; a responsive justice system; and early intervention and prevention.

The campaign is the McGowan Government’s contribution to the United Nations’ annual ’16 Days of Activism against Gender-Based Violence’ campaign. It marks the 16 days between the International Day for the Elimination of Violence Against Women (also White Ribbon Day) on November 25 and Human Rights Day on December 10.

“I would like to congratulate my colleagues from both sides of Parliament for taking the time to support the 16 Days in WA to Stop Violence Against Women campaign,” said Minister for the Prevention of Family and Domestic Violence Simone McGurk.

“This is a significant statement of cross-party unity, which sends a clear message to all Western Australians – violence against women must stop now.

“The statistics around family and domestic violence are tragic.  Nationally, one in four Australian women have experienced physical or sexual violence by an intimate partner.

“Sadly, less than 20 per cent of women who experience violence from an intimate partner report it to the police.

“We need to change the conversation in our homes, communities and workplaces to end violence against women – 16 Days in WA to Stop Violence Against Women gives us the opportunity to do just that.”